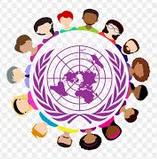 "The majority of the people haven’t noticed yet. But the awakening has begun"

So who are the prime movers in this "death cult" and whom do they serve?

Regular readers of this site will no doubt be well-informed about this already, but Global Research have put together a useful summary that (a) isn't to long (!) and (b) covers the main points.

Indeed, it also explicitly associates NATO as a primary enforcement arm of the cult that has been used in the past to deal with nations that do not intend to comply (Iraq, Libya, Kosovo/Serbia) - although there are other hats (UN "peacekeepers") that they also use to give their strong-arm tactics a veneer of respectability.

Funnily enough, now that the recalcitrant state that will not comply is Russia, NATO members are having to think twice before they decide to bully their way to victory in the Ukraine. Let us see how they face up to the Russian bear - somehow I suspect that the usual mix of lies and propaganda isn't going to cut it this time.

Whilst the main mechanisms through which the cult works are summarised, it has to be said that those for whom the cult ultimately works remain largely obscured. Perhaps Charlie Freak gave us all an insight when he documented the Trump World Tour of 2018-19 (short version).