Vaccines - No Escape from Down Under? 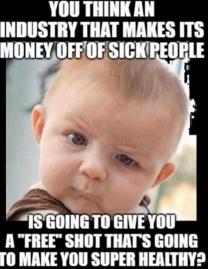 "PaxVax has proposed a number of control measures they say will restrict the spread and persistence of the GM vaccine and its introduced genetic material, however there is always a possibility of these restrictions failing and infecting wildlife and ecosystems."

I'm sure you don't really want to read this, but closing one's eyes and burying one's head in the sand is merely the avoidance of perception, it doesn't stop the reality.

Actually, they have been at it for years, and not just in Australia:

Principia Scientific International has the story.