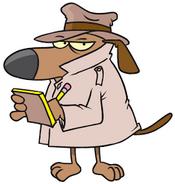 For those of us who still wonder why seemingly all previously accepted tenets of epidemiological, medical, statistical and governmental good practice were promptly thrown out of the window a year ago, possibly never to return in our life-times, Lockdown Sceptics take the bull by the horns and introduce the hitherto unmentionable (in gentlemanly circles) idea there might be a motivation in fraud.

Personally I think this idea is long overdue an outing - any rational enumeration of the possible causes of the current imbroglio must include fraud on the list, and given what we know about human nature, it seems ridiculous that this possibility should be excluded from investigation merely on the grounds that somebody somewhere may think it to be in bad taste.

Logic is impervious to taste, and as far as I know bad taste has never been known as a sure preventative of criminal activity.

So let us all man up and give this idea the attention it deserves.

They note a couple of apposite quotations:

“The pandemic represents a rare but narrow window of opportunity to reflect, reimagine, and reset our world” – Professor Klaus Schwab

“We couldn’t get away with it in Europe, we thought… and then Italy did it. And we realised we could.” – Neil Ferguson

"If neither of these quotes sends shivers down your spine, then I can only conclude you are as spineless as our current leader"

and then, rather than grasping the nettle, they go on to pull their punch by remarking:

"I include these not because I believe that the Great Reset is the factor driving the pandemic response, or that Neil Ferguson is some criminal mastermind intent on watching the world burn ..."

Now don't get me wrong - I also do not suggest that either or both of these propositions will turn out to be true, I simply note that no logical reason is advanced to exclude them.

Indeed the wording does not specifically exclude them, but it does leave the casual impression that these options are not considered worth pursuing . . .

If a whitewash is to be avoided, then each enumerated option must remain upon the table until disproved.

Anybody familiar with the exploits of M. Hercule Poirot will surely agree with that.