Why the Inexplicable images on our Farms? 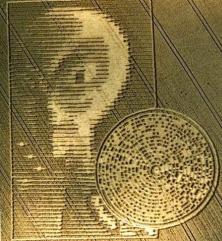 It is generally known that in the summer months various mysterious crop "circles" manifest uninvited in our fields, (and not just in the UK, although we do seem to be favoured more than most).

Debate (if we can still call it that these days) rages between those who insist that they are man-made in the dead of night by people wielding planks and lengths of string because there is no other rational explanation, and those who prefer to reconsider explanations previously regarded as irrational when the evidence indicates that the rational cannot be or is highly unlikely to be true.

Collective Evolution fall into the latter camp, and invoke some startling evidence to support their claim. It could however be equally argued that the evidence supports the man-made claim in many ways.

Still we are very definitely in the realm where the "man with plank" narrative has become an obvious impossibility, so we really do have to face the high probability of a new technology capable of 2D printing in wheat fields overnight without leaving any tell-tale traces of its visit.

The remaining question is whether or not that technology is of human invention.

See what you think.

Some think the unthinkable and produce evidence in support - Crop Circle Connector has more - much more . . .

For my own part I'm inclined to believe that the "three stars on the alien's shoulder" are nothing to do with military rank - it's much more likely that they indicate the galactic origin of the alien himself - his galactic nationality if you like.

What do you think?

How does a warning message about a grey alien from that part of the galaxy tie in with something else we have recently noted on this site?

A bottle of bubbly to the first person to put two and two together and This email address is being protected from spambots. You need JavaScript enabled to view it. the answer!